Arcadia Oaks-pedia
Register
Don't have an account?
Sign In
Advertisement
in: Trollhunters Weapons, Troll Objects, 3Below Weapons,
and 8 more

“Once far too heavy for him to lift, Toby very cleverly has Vendel trap the anti-gravity curse into the warhammer, making it light enough to hoist into the air. Unfortunately, the density of the warhammer is unpredictable, but over time, Toby learns to master the art of wielding its crushing blows.”
―The Art of Trollhunters

Weapons Wall in the Hero's Forge

"Trollhunters: Rise of the Titans"

The Warhammer is Toby's primary weapon of choice.

In "Airheads", Toby grows jealous that Claire gets to possess a magical weapon like Jim. Wanting his own weapon as well, he finds the Warhammer in the Forge's weapons wall, though it was initially too heavy for him to wield.

Luckily, after Vendel traps a Gravity Curse into the Warhammer, he can now wield it with almost no strain, though he still had problems cooping with its new gravity-changing abilities. Gradually, as the series progressed, he gains better control over his choice of weapon.

The Warhammer is made of smooth light orange crystal with some deep orange coloring in the centre. The crystal is translucent and the outline of the staff can be seen. One side is uneven and jagged. The other side is flat and has some golden engraving on it.

It is mounted on a long staff which continues into the head of the hammer and comes out on the other side as three sharp spikes. 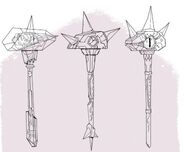 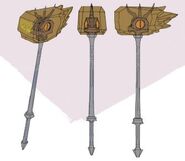