“Our approach to the design of the Trolls was to make them fun and visually interesting. We designed recognizable 'types' that you'd encounter in a real bar [as well as other places, like shops] and created their troll equivalent. Usually when you have to work on secondary characters like the Trolls that are going to appear in the background, you try all the crazy ideas you have left in you in terms of shapes and colors. However, you have to be careful to not make them too crazy or unique or else that will draw attention away from the protagonists!”
―The Team at Headless Animation Studio[src]

Trolls are a species of magical creatures native to the planet Earth (known from legends by humans).

Next to the humans, trollkind also has the largest form of societies and communities, all while living underground from the surface lands above and keeping their existence secret from mankind to prevent chaos and panic.

Trolls live in a society characterized by underground metropolises and the culture is composed primarily of trollish magic, charms, totems, and spells. Trolls are born of magic, from a chip of the mother and father's Heartstone into a small crystal which takes almost three decades (average length of time for Troll development) for the birthstone to crack and for the baby Troll to be born (stated in The Way of The Wizard).

Trolls originally hail from what is now the Darklands.

The trolls and humans were in constant conflict over the domination of the surface. The horrible deaths and bloodshed corrupted the first Heartstone, causing it to rot from within, and from inside it, Gunmar was born.

Centuries ago, a wizard called Merlin created the Amulet of Daylight, a powerful artifact that chooses a champion, the Trollhunter, to protect both humans and trolls alike.

Trolls lived in TrollMarkets in Glastonbury Tor prior The Clash of the Gumm Gumms and after, migrated to Dwozer.

Gunmar led the Gumm-Gumm Army to take the power of the surface and to devour all of mankind. This unleashed a war between the Gumm-Gumms and the rest of the Trolls that ended when the Trollhunter, Deya the Deliverer, defeated Gunmar in the Battle of Killahead, exiling him and all his army to the Darklands.

Sometime during the European Renaissance, a king and Vendel made a feeble truce known as "The Pact" between mankind and trollkind. The Trolls said they would limit their diet to cats and used articles of clothing. But as the years went by, a conservative segment of trolls grew restless. They longed for the Gumm-Gumms' brutality and strength, they believed "The Pact" made them look weak, that humans 'looked down' upon them. It was time for them to venture forth to a new land, a land of hope and possibilities unlimited. For Vendel sensed a new and all-powerful Heartstone in a new place humans called the "New World".

So, the remaining Trolls started to migrate.

The Trolls stowed away on a ship called the Mayflower, along with several Gnomes for companionship and nourishment. They left the ship upon spotting Plymouth Rock and emerged from the sea in what is now New Jersey, and after much searching, they managed to find a new Heartstone in California. There, they created the most notable troll community, Heartstone Trollmarket, a metropolis under the human town of Arcadia Oaks.

Gunmar was able to force his hand once escaped the Darklands, in response Morgana was free from her prison, the plan for the Eternal Night was executed and the remaining trolls migrated to Hoboken, New Jersey.

Trolls are characterized by their different-colored, hard, rock-like skin covered with carving-like tattoos and a recognizable koala-like nose. Some trolls, such as Blinky and Dictatious, have four arms and six eyes, and some of the background trolls have either one or two eyes.

Male trolls are bigger with large horns on their heads and have visible lower fangs. Female trolls are either big or slender, have no horns, and have smaller fangs similar to gnomes. 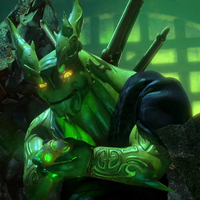 Arcadia Oaks-pedia has a collection of images and media related to Trolls which can be found at Trolls/Gallery.
Community content is available under CC-BY-SA unless otherwise noted.
Advertisement