Simon Spotlight
The Adventure Begins is the first novel of the Trollhunters book series written by Richard Ashley Hamilton. It was released on December 12th, 2017 by Simon Spotlight.

For the glory of Merlin, Daylight is mine to command!

Fifteen-year-old Jim Lake is just an ordinary teenager. That is, of course, until he is chosen to be the first human protector of a secret world of Trolls living below his peaceful hometown of Arcadia. If Jim fails at his mission, humankind will cease to exist. The fate of the world rests on his shoulders. Can Jim be the Trollhunter and stay a normal kid at the same time? Probably not. But being normal was never really any fun anyway. 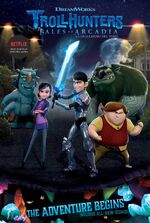