“Part rollercoaster and part hammers wheel, the gyre is a massive transportation system that spins the entire globe. Gyre operators use human sewer systems as their roadmaps.”
―The Art of Trollhunters

Move from one place to another in lightning speed

"The Oath"
Gyres are super-fast vehicles mostly used by Trolls for the last 200 years.

They are able to move through a vast network of underground tunnels and human sewer systems to any part of the world in record time.

Trolls used gyres for the last 200 years to travel around the world. They are accessible within gyre stations, which can be entered through the use of a horngazel.

The known places of travel are Trollmarket, Ojos del Salado, the Quagawumps' Swamplands, and most likely the Krubera Caverns. Team Trollhunters often uses the gyre to travel to these places during their hunt for the Triumbric Stones (though most of them, minus Blinky, hate its light speed traveling).

Later on in "Something Rotten This Way Comes", Stricklander used the gyre to travel to parts unknown after helping Jim cut Angor's eye, though it's unknown how the gyre was returned afterwards. Most likely it was replaced with a new one.

In the episode "In the Hall of the Gumm-Gumm King", Blinky attempted to use the gyre to escort the trolls out of Trollmarket when Gunmar began taking over. However, when Usurna and Dictatious learn that the Trollhunters are evacuating Trollmarket, they seal off the gyre station (leaving Claire in a last ditch effort to create a massive portal to teleport the trolls out of the station before they are ambushed).

As discovered in "The Oath", there is also a gyre that leads directly to Merlin's Tomb. However, it has no controls and requires a map which can activate the gyre (which so happens to be the very power source within the Amulet of Daylight).

This likely implies that gyres have been around more than 200 years, way before trolls began using them since they arrived in the US.

“The main idea of the gyre was to recreate the same type of fantasy vehicles we played with as children. We were inspired by the original gyroscope device, imagining how fast and dramatic it would be to pilot one of actual size and dimensions.”
―Alfonso Blaas, Art Director[src]

Many gyres take on an appearance of an over-sized hammers wheels, filled with contraptions and controls.

Gyres have an incredible speed, being able to move from one continent to another in a matter of seconds. 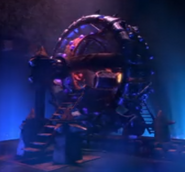