“The fate of existence is at stake! Bring me the Guardians of Arcadia!”
―Merlin to Douxie

Protecting Arcadia Oaks and the universe from the forces of evil

The Guardians of Arcadia (also known as the Champions of Arcadia, or the Nine Configurations) are a group of heroic, honorable warriors chosen to protect the universe from any evil supernatural threats.

It is currently lead by Douxie Casperan and Jim Lake Jr.

The first team, Team Trollhunters, was formed after Jim Lake Jr. became the first human Trollhunter. Its first members were Jim himself, Toby Domzalski, Blinky, and AAARRRGGHH!!!, until Claire Nuñez joined as well. Their mission was to eliminate Gunmar and his horde of Gumm-Gumms (and later Morgana) to prevent the occurrence of the apocalyptic Eternal Night. They would eventually join forces with Merlin to end the war. After their foes were vanquished, Jim, Claire, Merlin and Blinky left the team for New Jersey while Toby and AAARRRGGHH!!! stayed behind as the remaining members and sole protectors of Arcadia, or so they thought.

The second team, House Tarron, was formed parallel to the first team, after the royal heirs to the throne of Akiridion-5, Aja and Krel Tarron and their guardian, Varvatos Vex, crash-landed on Earth in order to flee from General Morando. Their second guardian, Zadra, followed soon after. House Tarron allied with Team Trollhunters and Team Creepslayerz in order to defeat General Morando and reclaim their kingdom, as well as prevent Morando from getting his greedy hands on Gaylen's Core to make himself an unstoppable god and destroy the entire universe. After his defeat, Aja and Varvatos return to Akiridion-5 while Krel remains on Earth.

Team Creepslayerz was formed when Steve Palchuk, growing increasingly paranoid about Jim and his friends, approached Eli Pepperjack and asked him to help him investigate their strange behavior. Eli warily agrees, and Team Creepslayerz was formed. They find out that Jim was, in fact, trying to protect Arcadia and that trolls do exist. They also assist Jim and his friends in helping the trolls to flee after Trollmarket was taken over by Gunmar. Later, they become close allies of House Tarron and help them defeat General Morando and his bounty hunters. After Morando's defeat, the Creepslayerz disband when Eli decides to act as Earth's ambassador on Akiridion-5.

All three of these factions soon realize that Merlin has intentionally founded and dubbed them all as "The Guardians of Arcadia", and they join forces with him, his apprentice, Douxie, and his familiar, Archie, when the fate of the worlds is at stake due to the mysterious and dreaded Green Knight and his allegiance with the evil Arcane Order. In order to save the future, the Guardians must travel to the past and restore history. Douxie, Claire, Steve and Jim get sent back and engage in the events that would eventually lead up to the distant origins of their teams. They eventually make it back to the present, yet are faced with more obstacles such as Merlin's death, safeguarding Nari and the Genesis Seals, and saving Jim from the Green Knight's control (who is later discovered to be the resurrected King Arthur). In the end, the Green Knight is destroyed, Jim is freed and turned back to human, but he loses his amulet and the mantle of Trollhunter is no more (although it is implied that he'll become the new wielder of Excalibur soon). The Arcane Order have the Seals, but they still need Nari to activate them, so she and Douxie leave Arcadia to hide from them while the remaining Guardians stay behind, but he promises to return to reunite with his newfound family soon.

The entire Guardians of Arcadia begins to fully come together in Rise of the Titans, where they are forced to face the Arcane Order together once again. After a failed attempt to destroy the genesis seals, the heroes split up to take one titan down. With two titans down, the heroes must face the strongest and most powerful titan. In order to increase their ranks, Jim is forced to pull out of Excalibur but fails, but with the help of his friends, he successfully pulls Excalibur out, and in new magic/akiridion armor, Jim ultimately kills the final member of the Arcane Order, Bellroc with Excalibur, with the aid of Toby Domzaski, who uses a trifurcate radiation generator to nullify Bellroc from using their magic. However, Toby is gravely wounded after being crushed by debris. After Toby gives his last breath, Jim decides to use the Kronisfere to travel back in time to the morning where he found the amulet, and ultimately allows Toby to take up the mantle of the trollhunter. 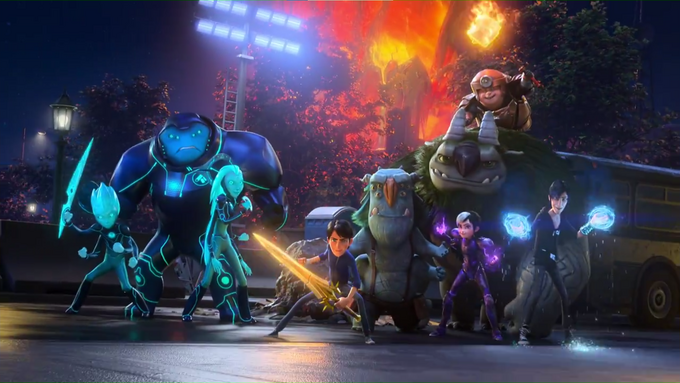