Foo-Foos are a species of rabbit-like aliens.

Much like Earth's rabbits, Foo-Foos tend to reproduce at high speed, being able to go from a couple to hundreds in just one week. Apparently, they all tend to be named by the prefix "Foo Foo" followed by some honorific that generally reflects some quality of the individual.

The Foo-Foos are beings of size that vary from small to medium. All have long ears and wear high-tech armors that covers their entire body.

They can jump at great heights, as well as be able to create more of themselves at an incredible rate. Several Foo-Foos have holographic rail guns, and enjoy destroying their surroundings with wild blasting. 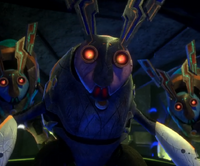