Cradlestones are magical gemstones used to transport limitless life-forms from one dimensional plane to another.

Before the Eternal Night begins, Merlin used the Lakes' microwave to create a Cradlestone, which he entrusted to NotEnrique so that he could bring back the Changeling Familiars before the Darklands crumbled to bits from the quakes.

Later, before the onset of the Eternal Night, NotEnrique and Gnome Chompsky entered the Darklands through the means of their Fetch. They then went to the Nursery. NotEnrique tried to activate the Cradlestone, but had trouble. Chompsky then took it from him and banged it against a rock, activating it. Immediately, all the babies were sucked into the Cradlestone and their faces could be seen on each individual stone.

After the war, NotEnrique brought the gemstone to Barbara, telling her to raise all the babies as her new foster children.

The Cradlestone is a large glowing orange-yellow gemstone composed of many smaller gemstones.

Cradlestones have the property of being able to transport living entities across dimensions, as it did with the Changeling Familiars. 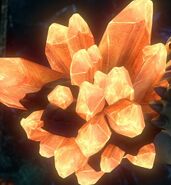 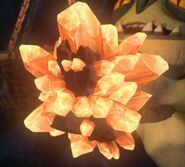 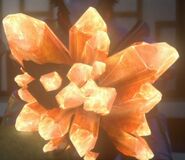