“In the Old World, Gumm-Gumms stole our young and did something unnatural to change them. Their sole purpose: to spy on the world above.”
―Blinky to Jim and Toby about Changelings[src]

Appearances of normal humans or trolls

Changelings are Trolls that were altered by Morgana and the Gumm-Gumms so they can assume human forms. Changelings are sent to the human realm as spies, supplanting infant human babies who are known as the Changeling's Familiar.

The Changelings are trolls who were abducted by the Gumm-Gumms from their youth, who did "something horrible" to change them. They're swapped with their human counterparts at birth and have dwelt among humans for decades, therefore anyone could be a Changeling.

The Gumm-Gumms use Fetches to sequester human babies and replace them with Changelings. The Changelings adapt perfectly to the human world, being able to exist as any person. It is known that there are currently hundreds of Changelings around the world, as well as hundreds of baby Familiars in the Darklands. They are organized under a Changeling spy group known as the Janus Order.

In order for Changelings to maintain their human guises in the real world, no harm must come to their Familiars in the Darklands, hence why the Gumm-Gumms tolerate their presence in the Darklands. For some reason, their Familiars remain unaged, stretching back as far as 1894. It is possible that a Changeling's Familiar remains unaged because of the formula fed to them by goblins or because of the dark magic in the Darklands (or most likely both). If a baby Familiar was to be rescued from the Darklands, the changeling bonded to that familiar would lose the ability to transform into that human and would be stuck in their Troll form forever.

Despite possessing more advantages than a normal troll, the Changelings are seen as inferior beings by Gumm-Gumms and most Trolls, referring to them as "impures". This could most likely due to their two-faced natures and their unpredictability.

Similar to the Trollhunters, the Changelings have a code of three rules:

Changelings are shapeshifters, so they can either have a common appearance of a human and a troll.

Unlike other trolls, most Changelings (minus Gladys and Krax) demonstrate a more humanoid appearance and size in their troll forms.

In human forms, they speak like regular people. In their true form, their voices are usually more deeper and raspier.

By connecting with a specific human, his or her Familiar, the Changelings are able to assume the appearance of that human when they wish. In their human forms, the Changelings also appear to be immune to the effect of sunlight just like Stalklings, regardless if they are in their troll forms as well, thus making them the perfect spies for the Gumm-Gumms. Some of them, like Stricklander and Nomura, are accomplished warriors.

However, they can be revealed if someone physically contacts them with a gaggletack (an iron horseshoe).

There are a few Changelings called Polymorphs that are able to assume the appearance of whoever they wish, human or troll, without the need of a Familiar. (Ex. Otto Scaarbach)

Although they're not affected by sunlight at all, a Changeling's most common weakness are Gaggletacks, which reveals a changeling's true nature through physical contact of anywhere on the body. 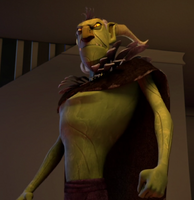 An unnamed police chief in Bordeaux mentioned in Blinky's Day Out

An unnamed state senator in Boise mentioned in Blinky's Day Out

An unnamed news editor in Shanghai mentioned in Blinky's Day Out