"The Exorcism of Claire Nunez"

The Book Of Ga-Huel is an ancient tome of Gumm-Gumm history and dark magic first commissioned by Orlagk. Stricklander currently owns the book and keeps it in the secret compartment in his office.

Hearing rumors of a traitor within his ranks, the Gumm-Gumm warlord, Orlagk the Oppressor, began to use a variety of means to try to learn of the traitor's identity. Growing desperate, the warlord finally turned to forbidden dark magic. Inspired by what he heard of the Venerable Bedehilde's forty-seven volume magnum opus, Orlagk commissioned the creation of The Book of Ga-Huel from its author, the Dishonorable Bodus, hoping to use its powers of prediction to find the traitor within his midst.

For reasons unknown, despite ordering the book's publication, Orlagk still couldn't use it to uncover the identity of the traitor. This is most likely because Gunmar knew the Bodus and the book were threats to his goals, so he ordered his own army to assassinate the author and reclaim the book as his own to keep it away from Orlagk.

Many Trollhunters have been sent on a quest to find Bodus and recover The Book of Ga-Huel before Gunmar could, in hopes of using the tome's prediction powers for good rather than evil. Sadly, neither of them ever succeeded in uncovering its mysteries.

Spar the Spiteful was one of the first to find it, only to be blinded by its magic ink before being ambushed by Gunmar and Bular soon after. Boraz the Bold was then charged to protect Bodus from a horde of Gunmar's Gumm-Gumms, but due to his own ego, he allowed Bodus to be assassinated with The Book of Ga-Huel in the hands of Gunmar. Unaware to Boraz, Bodus actually hired a Polymorph to pose as him and fake his death so he could continue finishing his books.

Wanting to use the book for his own reasons instead of destroying it to prevent Orlagk from discovering his treachery, Gunmar entrusted the Jungle Trolls of Yucatan Peninsula to protect the book from any who try to take it. Unkar the Unfortunate was sent to the temple to retrieve The Book of Ga-Huel, only to be caught by Bular and tore apart limb from limb, on his first (and only) night of Trollhunting.

Finally, in 1937 during WWII, Kanjigar the Courageous journeyed to to Berlin, Germany to claim both The Book of Ga-Huel and The Final Testament of Bodus from the Hindenburg Library that was in the midst of a tomecide of the Nazis. While Kanjigar managed to recover The Final Testament of Bodus, he failed to take The Book of Ga-Huel, which ended up in the hands of Stricklander, who then took it as his own.

Toby, Blinky, NotEnrique and AAARRRGGHH!!! came across The Book of Ga-Huel after infiltrating Strickler's hidden vault within Arcadia Oaks High. Taking a peek through its pages, Toby notes an illustration of Gunmar on one page and a vicious Gumm-Gumm that resembled AAARRRGGHH!!! on the other. NotEnrique asserted that is was indeed AAARRRGGHH!!! and a sigh from the gentle giant confirmed the horrible truth. Blinky then told Toby of how AAARRRGGHH!!! was a general in Gunmar's horde, but later changed sides before the Battle of Killahead. Taking another look at the illustration of AAARRRGGHH!!!'s former self, Toby insisted that it was all in a past and that his wingman was not the monster he once was.

During the Spring Fling dance, Claire and Toby infiltrate Strickler's office again to get a page with the counterspell required to sever the magical bond between Strickler and Barbara Lake. Due to the unexpected interference of the teachers and Angor Rot, Claire is forced to throw her Shadow Staff through the portal right into Trollmarket.

The Book of Ga-Huel plays a significant role in the novel of the same name.

Strickler brought The Book of Ga-Huel with him to Claire's house after the Trollhunters discover she was possessed by the spirit of Morgan le Fay. Blinky expressed concern over using a book full of dark magic and Strickler, stating that all dark magics come with a price, concurred. Holding open the book, he showed an illustration that revealed that Morgana was using Claire as a vessel into their plane of reality. Subsequently discovering that she possessed no shadow, Strickler realized that Claire's spirit was trapped in the Shadow Realm and their only hope was traveling into the space between realms to save her before Morgana retains control of her body permanently. 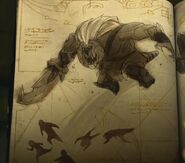 Entry of Bular in the book

Entry of AAARRRGGHH!!! in the book