“Intricately forged by Merlin, the Amulet is not only the harbor of a Trollhunter's sword and armor, but a source of great magic.”
―The Art of Trollhunters

Summoning the Trollhunter Armor, the Sword of Daylight (formely)

"Rise of the Titans"

After acquiring all three Triumbric Stones, the Trollhunter could unlock a new armor: the Eclipse Armor along with the only known weapon capable of permanently killing Gunmar: the Eclipse Blade.

The amulet was later destroyed by the Arcane Order so that they could release Morgana from the Shadow Realm.

Prior to the events of Rise of the Titans, the amulet was rebuilt and upgraded by Krel Tarron and Stuart, now allowing to summon the Magiktech Armor and, due to the connection it has with the legendary sword, Excalibur, it is able to summon the sword anytime the wearer wishes.

"Ad lucem gloria mea (Light my glory)!" -Merlin completing the Amulet in a flashback of "The Oath"

The Amulet was created by the wizard Merlin for his Trollhunters to use during the 12th century, right before the start of the Battle of Killahead. Merlin took Morgana's left hand to make the amulet. According to legend, he made it malleable so each Trollhunter could combat the darkness that even its creator could not foresee. The Amulet is roughly 900 years old but it is unknown how many Trollhunters have wielded it.

Deya the Deliverer, the first Trollhunter, used the Amulet to seal Killahead Bridge, trapping Gunmar and his Gumm-Gumms in the Darklands before the bridge was torn to pieces.

Sometime after trolls settled in America, the amulet fell into the possession of Kanjigar the Courageous, who would become one of the best Trollhunters. To focus on his training and serving troll kind, Kanjigar chose to distance himself from his young son Draal, who began training to become worthy of the amulet.

Kanjigar was defeated and disarmed by Bular, the son of Gunmar, under a bridge in Arcadia Oaks. To prevent the amulet from falling into Bular's hands, Kanjigar sacrificed himself by falling into the sunlight, petrifying himself and keeping the amulet out of Bular's reach.

On his way to school, Jim Lake Jr. and his best friend, Toby Domzalski, discovered Kanjigar's remains in the canal, along with the amulet, which called Jim's name. After school, Jim managed to activate the amulet while also meeting his trainers, Blinky and AAARRRGGHH!!!.

He later became the Amulet's first Half-Troll wielder and ultimately it's last wielder after the Amulet was destroyed by the Arcane Order to resurrect Morgana. However, after Krel and Stuart rebuilt the Amulet, he became the upgraded Amulet's new and only wielder.

After resetting the timeline, Jim allowed Toby to become the new timeline's Trollhunter.

It is a compact metal amulet with intricate metal parts inside the external framework and was fashioned from Morgana's left hand. The glowing blue stone in the center of the amulet is the source of all the amulet's power. When the three Triumbric Stones are inserted in it, the central stone glows a blood red.

“For the glory of Merlin, Daylight is mine to command!”
―Incantation for the Daylight Armor

“For the doom of Gunmar, Eclipse is mine to command!”
―Incantation for the Eclipse Armor

“For the pursuit of Angor, Moonlight is mine to command!”
―Incantation for the Moonlight Armor[src]

“For the good of all, Daylight is mine to command!”
―Incantation for the Magiktech Armor[src] 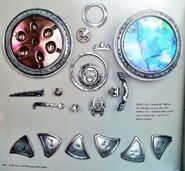 For the doom of Gunmar, Eclipse is mine to command! 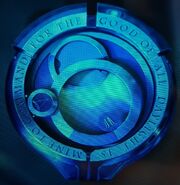