“Unlike Earth, where beings are biological, life on Akiridion-5 are energy-based.”
―Mothership

Akiridions are an alien race of inorganic energy-based beings native from the planet Akiridion-5.

Akiridion society is mainly characterized by their numerous technological advancements, having developed hoverboards, holographic interfaces, and advanced weaponry concealed in a compact serrator. This, combined with their advancements in science and mathematics, lead to an advanced, technology-based society, with advancements that make Earth's own technology seem primitive in comparison. As mentioned by Krel, Akiridions gather knowledge through thermogenic cosmesis, a process which allows them to learn at a rate much faster than the average human.

Akiridions reproduce by kissing, with the seventh kiss resulting in the male's pregnancy. Akiridion pregnancy seems to last for about a day or so. According to Aja, a single pregnancy can result in three to five Akiridion children, although there can be more. In Trollhunters: Rise of the Titans, Aja and Steve Palchuk have seven human-Akiridion hybrid children. It is unknown what happens if they kiss more than seven times or if they can get pregnant again.

They live in a monarchy, ruled by royal family houses. For hundreds of keltons (years), Akiridion-5 stood divided between two houses: House Akraohm, Queen Coranda's ancestors, and House Ventis, King Fialkov's ancestors. Both houses were combined, with Coranda and Fialkov's marriage, into House Tarron, who rules in peace until the coup of General Morando.

All Akiridions are distinguished by their electric-blue hue, being the color of their skin, hair, and eyes. They are humanoid, energy based life-forms, with corporeal bodies originating from their life cores, which house their very souls. They also wear jumpsuits with different shades of blue, with electric blue trimmings.

Akiridions are stronger, faster, more durable, agile, and intelligent, and have better reflexes than an average human. Also, being inorganic life forms, they have no need of food or drink for sustenance, and it is assumed that they have a level of hypermetabolism, as shown when Aja ate an entire Diablo Maximus burrito with no digestive problems. They also have vacuum adaption, as they don't require oxygen to survive. In addition, they have a much longer lifespan than the average human, much like Trolls.

An Akiridion also will not die as long as its life core is not destroyed, but if its physical body is destroyed, its reconstruction would take an indeterminate amount of time.

In addition for being energy-based beings, despite their enhanced durability, Akiridions can lose their physical bodies if they suffer too much damage. However, they don't truly die as long as their life cores remain intact. If the core is active blue, they can be placed in stasis and the Akiridion's body can regenerate for an undetermined amount of time (unless crushed into bits). But if the cores are dead gray, then stasis is not possible and the Akiridion is completely dead. 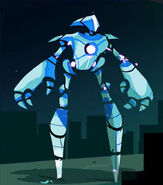 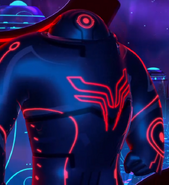