A few days later, Adbwen and her husband get a knock on their door and Vendel is standing with their sons head in his hands. Atnur punches Vendel in the face because Atnur and his wife thought Vendel killed their son, but Vendel explained what happened to to Araknak. A few hours later, they buried their son's body. Abdwen went home, but Atnur stayed. Later on, Adbwen went back to her son's grave to go get Atnur, but on the way there, she saw Atnur stony body on the ground. She ran and told Vendel and then they buried Atnurs body. Then she went home all alone forever.

It is unknown if she is dead or alive in the present.

Abdwen has green hair and skin. She wears a brown coat and she has four eyes and arms. 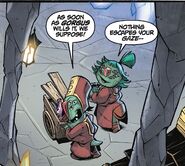